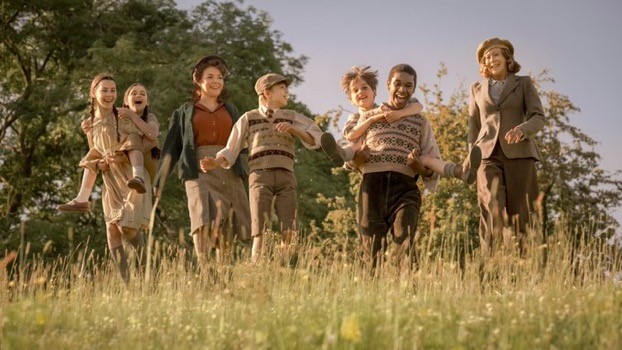 Cinemagic is a youth film charity festival which aims to educate motivate and inspire young people. The organisation produces film festival programmes and short film productions for young people to unite individuals from diverse backgrounds through film and teach skills in the creative industries. Cinemagic’s Dublin Summer season runs over June-August and Cinemagic hosts its 33rd annual festival in Belfast in October. Tickets available for Dublin and Belfast special previews are available from each participating cinema.

Inspired by one of the most beloved British family films of all time, THE RAILWAY CHILDREN RETURN is an enchanting, moving and heart-warming adventure for a new generation.

There to meet them on the train station platform are Bobbie Waterbury (Jenny Agutter, reprising her iconic role in the original film), her daughter, Annie (Sheridan Smith), and grandson Thomas (Austin Haynes), and with their help the evacuees are soon settling into their new life in the countryside.

When the children discover injured American soldier Abe (KJ Aikens) hiding out in the railyard at Oakworth Station, they are thrust into a dangerous quest to assist their new friend who, like them, is a long way from home.

THE RAILWAY CHILDREN RETURN was written by BAFTA-winning Danny Brocklehurst (BRASSIC, Red Productions’ THE STRANGER, THE FIVE, SAFE and COME HOME), based on a treatment by the BAFTA and award-winning producer Jemma Rodgers. Rodgers also produced the film for STUDIOCANAL.

The original 1970 film THE RAILWAY CHILDREN is a key title in STUDIOCANAL’s celebrated Vintage Classics collection.

The fully restored Blu-ray and DVD release includes a retrospective documentary and interviews with key original cast members. The film is also available to own on Digital across all major retailers, and also available on new streaming platform STUDIOCANAL PRESENTS.

THE RAILWAY CHILDREN RETURN – OPENING IN CINEMAS ON 15 JULY 2022

From home-grown crowd-pleasers and world cinema greats, to acclaimed independent movies and modern and classic horror, STUDIOCANAL PRESENTS offers subscribers access to a wealth of exceptional film and series from its renowned and world-spanning library.

A variety of new titles will launch on the channel every month, many of which can’t be streamed anywhere else in the UK.

Fans can sign up via an Apple TV-compatible device for a seven-day free trial and subscribe directly to STUDIOCANAL PRESENTS for £4.99 a month.

STUDIOCANAL PRESENTS also offers series highlights such as Hannibal and, for the first time ever on a streaming channel, acclaimed crime drama Spiral.

ABOUT STUDIOCANAL (A CANAL+ COMPANY)

STUDIOCANAL, a 100% affiliate of CANAL+ Group held by Vivendi, is Europe’s leader in production, distribution and international sales of feature films and TV series, operating in all four major European markets – France, United Kingdom, Germany, and Spain – as well as in Australia and New Zealand.

STUDIOCANAL finances and produces around 30 films per year, partnering with talent to make films in several languages, including English, French, German, Spanish and Danish to name a few. STUDIOCANAL distributes around 50 films per year and owns one of the largest film libraries in the world, boasting nearly 6,500 titles from 60 countries. Spanning 100 years of film history, this vast and unique catalogue includes among others the iconic Terminator 2, Rambo, Breathless, Mulholland Drive, The Graduate, The Third Man, and Belle de Jour. Among STUDIOCANAL’s biggest successes are Paddington 1 and 2, Tinker Tailor Soldier Spy, Non-Stop, The Stronghold, Black Box, and A Boy called Christmas.

STUDIOCANAL also produces more than 200 hours of TV series each year and operates at an international level, by globally distributing its scripted productions and CANAL+ Création Originale (1,000 hours of current and library content in distribution).

STUDIOCANAL and the CANAL+ Group, being aware of their responsibility as a media company, producer and distributor of film and series, share Vivendi’s eagerness to promote ambitious and inclusive creations, which also address the urgency of climate change.